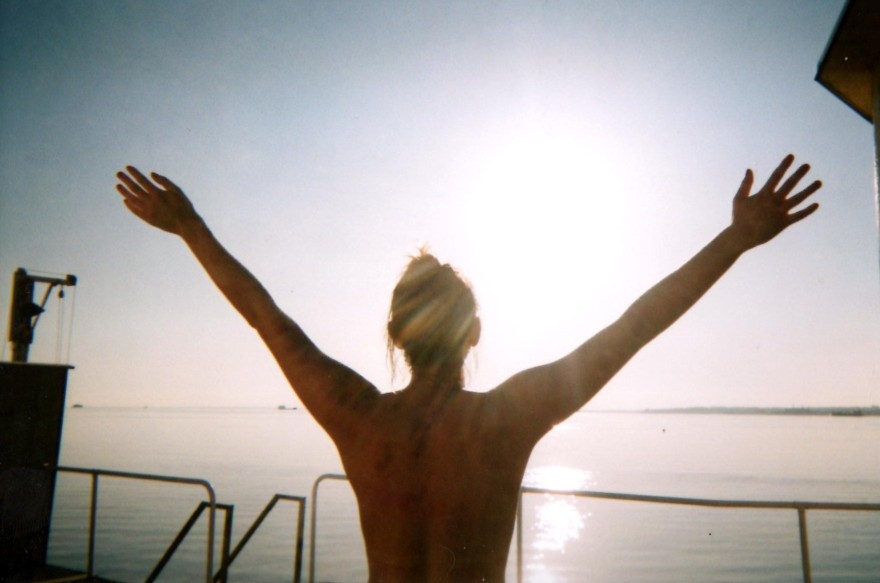 Up until earlier this year I had been like most other English people in regards to public nudity – utterly horrified.

Nakedness was something to be ashamed of, and as such when I was younger I would have recurring nightmares (which are really quite common) about my school peers seeing me on the playground naked. In the swimming bath changing rooms I would change in a booth or else desperately clutch my towel awkwardly around myself whilst trying to untangle my not yet quite dry limbs and garments; lest everyone see my wobbly bits. My friends and I would titter at the older ladies walking around starkers in a nonchalant fashion, amazed they weren’t trying to hide their abundance of pubic hair.

Brain washed by magazines and TV, my teenage years were spent obsessing over food, silently competing with peers to see who could eat the least at lunch or breakfast break in the bid to achieve the ‘perfect body’. This silliness partially stopped when I started excercising properly – swimming, running and going to the gym regularly – around age 18; and I went on to complete a half marathon aged 19.

Despite this university is not a place conducive to healthy eating, and following my move into university halls without my marathon training regime and with the added excess of alcohol and binge eating I put on a stone. In an environment where you’re living with waif like flatmates and friends the pressure can pile on, and again I began to obsess about what I ate, though never to the point of an eating disorder still in a distressing fashion.

This improved after moving out although I wasn’t particularly happy with my body. Then I read The Beauty Myth by Naomi Wolf and my thinking was changed forever. Wolf logically presents the way in which images of ‘beauty’ are presented to society in order to make women feel insecure and inadequate about their bodies and themselves, and buy into the beauty/cosmetic surgery industry as a result. Although the book discusses topics I had already considered it provides them in an unskewed, alternative way which I had previously not considered. I got angry at the double standards women face in comparison to men – why should the director of the board be allowed to be fat if they’re a man but forced to be skinny if they’re a woman?

These changes in attitude were put to the test in February when I visited a close friend in Sweden. She had told me of a sauna on the seafront, and casaully mentioned the day before we went that it was nudist. Although more confident than previous years I was still apprehensive, and it took a little encouragement before I parted with my towel in the sauna – but I’m so glad that I did.

After an initial few minutes of awkwardly avoiding other women’s gaze I settled down and enjoyed the spectacular view ahead of me – a gorgeous spring morning in Helsingborg, the sea stretching out into the horizon and the sky a mixture of dusky pinks and purples. After working up a sweat we made our way outside onto the platform overlooking the sea and then down the adjoining stairs into the -3 waters. Needless to say it was FREEZING. But the feeling when we got back out was incomparable.

Eager to experience such a feeling again, I was more than happy to visit a nudist sauna and pool in Berlin when I visited this weekend. The friends who went with me agreed it was an amazing experience which left them feeling free and liberated.

As a result, when I heard about an initiative by a company called Spirited Bodies allowing people to volunteer as life models, I jumped at the chance. The scheme allows people to pose within a group, allowing freedom of expression and discovery but in a comfortable group environment.

An hour before the event I was nervous. Going to the venue in South East London, dressing gown and slippers at the ready I felt a tingle of doubt, but surpressed this and carried on anyway, excited nerves carrying me forwards. Meeting the other participants put me at ease, and when the time came to disrobe in front of the artists (there was quite a crowd of people, around 20 ) we did so collectively. For the first pose/couple of minutes I was a bit shy, how to stand, where to look?! By the second pose though I was ready, concentrating on different creative postures for the artsists to draw which I would be able to hold, and even posing with another woman in the group, leaning together and holding hands to create an arch (which also nicely framed another woman who was sitting down in the background).

The half hour pose was by far the most challenging. I decided to adopt a classic pin up stance, lying on the floor with my legs propped up in the air against the table ledge, arms stretched out above my head. This was actually very comfortable…for the first fifteen minutes, but by the end pins and needles had taken over most of my limbs andI was desperately flexing most of the muscles in my face to distract myself from the discomfort. That said I enjoyed the challenge, and it allowed me time to relfect and meditate.

Another reclining pose proved just as enjoyable, but by the end of the two hours I was definitely tired and a little achey from some of my more adventurous stretching poses! The group dynamic throughout was extremely postive, and during the second hour which allowed periodic continuous movement the group worked toegther harmoniously to create a striking tableau.

Below is a drawing one of the artists created, those of you who know me may be able to guess which one I am… 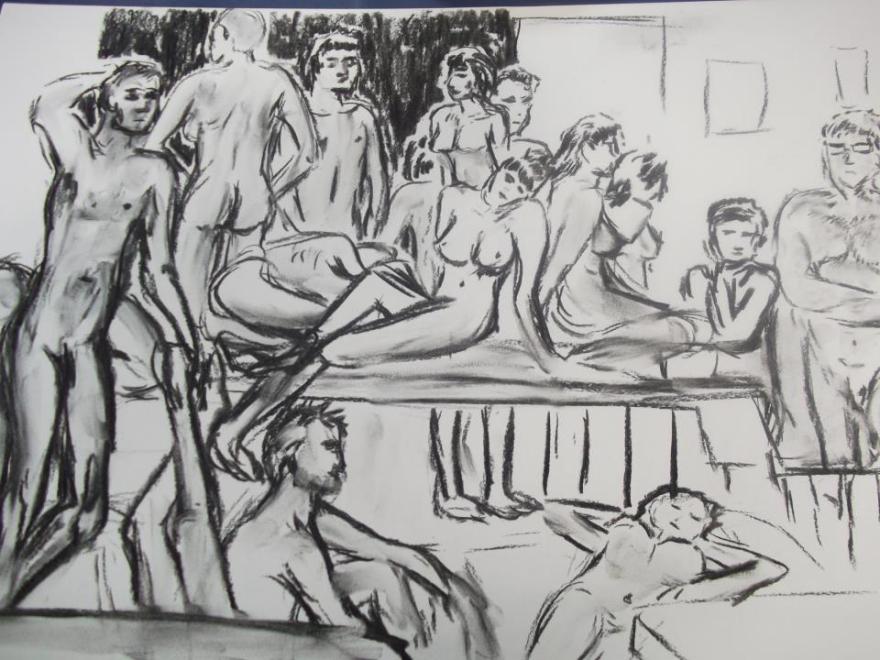 Overall an incredible experince, and one helping to mark a positive turning point in my self perception and feelings towards my own body image.  Following this I am joining the Register for Artist’s Models and considering getting paid work in this field because I enjoyed it so much. I would recommend this to anyone…so go on, what’s the worst that could happen? The school bully’s probably too busy working in McDonald’s now to come tease you anyway.